In the 19th century, logging shaped the landscape of northern Wisconsin.  It brought thousands of workers jobs, and formed today’s paper industry.  In the late 19th century Wisconsin was one of the premier lumber producing states in the U.S., and from 1890-1910 forest products were #1 Wisconsin’s economy.

Logging was minor when the first white settlers came to WI.  They brought lumber from the east even though it was very expensive.  The Wisconsin River was one of the first areas to be cut on a large scale.  Rivers were very important for logging.  The logs would be transported to mills using the rivers and the mills would use the water to power water wheels and saws.  The Black and Chippewa Rivers were the source for ⅓ of the logging industry in WI. The soft pine floated and seemed like an endless supply of lumber for urban areas.

The start of the 20th century brought large changes that made loggings future uncertain.  The early logging operations selected only the best trees for lumber, but the new methods being used cleared entire forests.  Logging declined and most of the land that was used was sold as farmland.  Many European settlers tried to farm old logging areas which did not work well.  Some of the cities created by logging survived, but most of the northern cities turned into small villages.

The following site found at the Wisconsin Historical Society has articles about early logging in our area.

The logging in Gordon first began in 1865. It would have started earlier, but the Civil War stopped them.  Loggers came up rivers to buy land for logging because there was no roads.  They worked from November 15th to April 1st; some worked all year long, but most logged in the winter.  The loggers had Sundays off to clean and sharpen axes and saws.  Lumberjacks would leave if there wasn’t  good food because they needed it for strength.  The loggers ate early and had their lunch brought to them while they were logging.  There was no talking while they ate.

The loggers used big sleighs to move the wood and used horses or oxen to pull the sleighs.  In the winter, the logs were moved to the rivers edge and in spring they pushed them in and let them float down.  The dams made the water higher and it allowed the logs  to float better.  The 7 Mile Dam on the St.Croix was built to help the logs float.  They used white pine for the main tree pnb because it had straight grain and it floated.  Another name for white pine is corkwood and it was floated down the St.Croix.  Axes were used to cut notches in the tree and a two man saw was used to cut the trees.

Three people slept per bed In their bunkhouses, which had no windows.  There was a kitchen at one end and the bunks at the other end.  The bunkhouses used kerosene lamps for light and had hay for their comfort on the beds.  There was a lot of racks to dry their clothes because they were wet from the snow.  The roof was made of shake shingles and the fireplace was in the center of the room to put off the most heat. 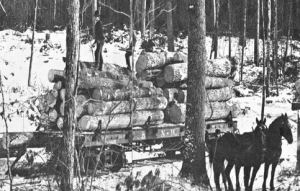