The Cut-A-Way Dam was built by Issac Staples in the year of 1871. Staples had built the dam in between Solon Spring wi and Gordon WI, the main purpose of this dam was to move lumber down the Saint Croix River. The the Cut-A-Way Dam was built at the Northmost point that a logging dam could be built at the time, because loggers needed fast rivers and rapids to move the logs down the river faster and in between Gordon and Solon was the best place. The dam cost about $10,000.. The idea with the function of the Cut-A-Way Dam was that in the winter the loggers would move all the lumber onto the ice behind the dam. Then when the ice melted and the water on the other side of the dam was high enough the loggers would open the gates and then the surge of water would carry the logs down the river to the sawmills.

This logging dam was in use until the early 1900s because the loggers had cut down most of the trees in that area thus the Cut-A-Way Dam had to be abandoned. The dam sat abandoned until 2007, when a snowmobile trail was built on top of the dam.

Now the Cut-A-Way Dam stands over the Saint Croix river and still has a use today.

The Totogatic River is a 70 mile river that flows from Nelson Lake in Bayfield County through Washburn County to the confluence of the two rivers, Totogatic and Nemakagon in Burnett County. The Totogatic River became Wisconsin’s 5th Wild and Scenic River way in 2009.  That means that the Totogatic meets certain standards that put them in this group.

The Nancy Project dam on the river in Minong creates the Minong Flowage.  The dam was built in the late 1930’s and is now owned by Dahlberg Light & Power.  It has four gates.  The dam is made of concrete and the gates are made of wood. It is a Hydroelectric dam and can produce 2,400 volts and 75 amps.

There are many legends & myths about the Totogatic such as the “Spirit-Being” Wanibiju.  There used to be a peculiar phenomenon known as “Wanibuju’s Footprint”, which was a perfectly shaped footprint in solid rock before they built a dam there.

The Totogatic River is also a home for many animals including eagles, otters, turtles, prairie skink lizards, and the fearsome hognose snake.

Have you ever wondered about the history of the Colton Flowage, how it got its name, or about any of the species that live in there?  There are some fascinating facts and history about the Colton Flowage.
The Colton Flowage got its name after a wealthy man named Kingsley B. Colton.   Kingsley and his wife Dorothy moved from Chicago to the general area of Minong.  Kingsley was not born wealthy, but did become a rich man. Dorothy’s father started the C.D. Peacock Jewelry Company.  C.D. Peacock Jewelry Company sold jewelry to wealthy families and today they still sell to the famous and wealthy.  And that’s how Kingsley got all of his money to buy land.
Kingsley had his glory days, but as in all fairy tales, they did end.  Kingsley owned a lot of property around the Colton.  Around his property there were many railroad tracks.  A dam washed out of the Colton Flowage causing a railroad worker to lose both of his legs by the water flow.  After that happened, the railroad company sued Kingsley for the incident.
The dam on the Colton that you see today is not the original dam.  The original dam that was on the Colton was washed out in 1938 or 1939.  After the original dam was washed out and the new dam was built the river changed its route.  Other than when the original dam was washed out the area around the Colton has not been significantly affected by floods.
The Colton Flowage has some pretty neat history.  One of the neat parts of history is when the river became wild river property on July 10, 2009.  Something else you may not have known was that the river was used for logging at one time.  Another cool thing is that the dam that was built on the Colton was for watering the nearby cranberry marshes.
When a friend and I went to the Colton we did some researching and mucking.  While we went mucking we found lots of creatures.  But we were not able to identify what all of the creatures were.  The identifiable creatures that we found were water scorpions, water scavenger beetles, water boatman, crayfish, and we even saw a fish or two.
When we were at the Colton we also did some water testing and got some good results.  When we did our testing it was early November, so that may change a few things depending on the time of the year.  The temperature of   the water was 42 degrees Fahrenheit.  The P.H. of the water was 6 which was pretty good seeing as how neutral is 7.  We also tested the dissolved oxygen and we got 4 parts per million.  The last thing we tested for was coliform bacteria.  Our results were negative.  So from the information that we gathered, we can conclude that this section of the river is pretty healthy.
Since the Colton Flowage is a part of a wild river, its changes over the course of time will be minimal and you will be able to visit and enjoy the Colton for generations to come.

The Namekagon can be spelled two different ways. The most common way to spell it is  “Namekagon” but you can also spell it “Namakagon”. The Namekagon got its name from the  Ojibwe language. Namekaagong-ziib which means “River at the place abundant with sturgeons”.

There was a lot of major logging going on in  and around the Namekagon River. Around the late 1800s and early 1900s is when the logging happened. It changed a lot of habitat and land use. It also made the population of the native cold-water fish decrease. It decreased because of pollution. Then in 1901 the logging stopped because of the railroads. They started to carry the logs where they needed to go.

The Saint Croix River is a very important part in the history of Wisconsin. St. Croix in french means Holy Cross. The St. Croix river has had inhabitants for over 10,000 years! Fur trade started in about the 1600s. Beaver pelts were the prize. Getting a beaver pelt was like winning the Super Bowl. The first fur trader on the St. Croix was Sieur Du Lhut (A.K.A. Daniel Greysolon). Fur Trade ended in 1820 because of Decrease of wildlife population

The St. Croix river was also a main route transportation of logs from logging camps and boats transporting workers, tourists, and goods. It also transported goods to the Mississippi River to send to ports and the Gulf of Mexico. The logging here, when settlers first started logging, was amazing. They mostly logged White Pine and Red Cedar. In 1890 the logging industry on the St. Croix was booming. That year they logged 450,000,000 board feet (1,100,000 cubic meters). Today The St. Croix has many tourist attractions;  fishing is just one of the many. 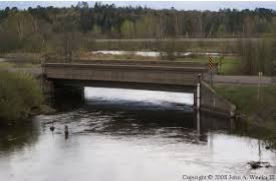 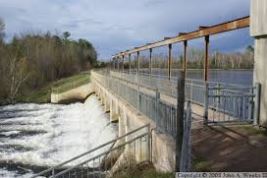 The repairs on the Minong Dam started on April, 2013.  Water had to be taken out so the cement wouldn’t be ruined.  After that the water came down five feet. The Cranberry Dam came down too. The cost of the dam repair was 1.1 million.  The WI DNR  gave $400,000 and Dahlberg Light and Power gave $100,000 in donations to help with the repairs.  Property owners  have to pay a special assessment.

The existing powerhouse that was at the dam has been removed. The old dam that was a high hazard dam. Some risks of not repairing the dam were it can fail or loss of life or property. Six people from Staab Construction came to the dam to repair it. They used 1,200 yards of cement and 55 tons of rerod.  At the end of the project, they found that the mud gates failed. On March 3, 2014 the repairs were done and it was inspected.

The dam was reopened so water could start to fill the lake again. The water level rose at a  rate of two inches a day. The DNR said that they can only come up six inches a day. As of April 13, 2014, it was a foot below the normal water level. The water comes up from Nelson Lake near Hayward all the way to the Minong Flowage. It will also come up because of the spring thaw.