Camp Jackpine was first established in 1953 by Stewart Buhai. The Camp was advertised as a children’s overnight summer camp. The focus was increasing a  child’s appreciation for nature, science, and the environment. Camp Jackpine is on seventy three acres of land on a three hundred acre lake. Lake activities involved water skiing, swimming, and canoeing.  Along with land activities which were science experiments in the science lab, baseball, archery, tennis, and making friends.

Camp Jackpine is on the notorious Bond Lake. It is known for its crystal clear water, sandy bottom, great fishing, and beautiful sunsets. When Stewart  Buhai owned Camp Jackpine six campers could stay in each cabin and only one washroom throughout all of the cabins. So many things have changed since then.

The man who bought Camp Jackpine after the jewish boy’s camp in 1987 was my great uncle James P. Liautaud, but when he passed away in 2015 his four kids and my Great Aunt Gina took it over. Now every summer they each get a week to themselves where they get to invite all of their friends and family to the camp.  Now Camp Jackpine has eighteen cabins with bathrooms. Every single cabin is luxurious and very clean.

The lodge is where the magic happens  and also where the most fantastic food is made. Today the camp offers a girls bunk house,  a boys bunk house, extraordinary tennis courts, a go kart track with go karts of course, a really fun water trampoline,  a playground, and once again of course making friends! This camp has made memories for its guests!

The Gordon/Solon Springs Bird Sanctuary is about 4,000 acres scattered with jack pine, northern pin oak, and red pine trees. The Bird Sanctuary is also one of the best sharp-tailed grouse habitats in Wisconsin and also have many, many other bird species. And has many other animals like a timber wolf, black bear, white-tailed deer, American badger, and a lot of other common animals. With a wide variety of amphibians, reptiles, and turtles including northern hog-nosed snake, northern prairie snake, grey tree frog, eastern toad, western painted turtles, and some other species.

“John Chittamo and Joseph Blackburn were traders and located in Chittamo.  Old John Chittamo was a full blooded Chippewa Indian.  He had put up a log cabin, which his family and he used in the wintertime.  But he also had a bark wigwam alongside of it which they used in the summertime. The other Indians used Chittamo’s place for stopping and camping. When they stopped there, they would build temporary wigwams and sometimes there would be a dozen wigwams with Indian families at Chittamo’s place.  A colorful addition to the Chittamo story is Emily Engebretson’s observation that “Old Chittamo had Negro blood in him.”  That the old chief was of mixed blood is more than likely, for the Native Americans made little racial distinction, and as young America was expanded westward mixed marriages were scarcely the incident they are today.  More telling is the diary record of the Chittamo’s having adopted a white baby, born illegitimately in a Minong hotel and of their heartbreak when the infant lived only a few weeks.  Emma Goodwin Smith tells their story:  “They buried their little treasure in their front yard, built a little white house over it, and put a tiny white fence around the house.  When it rained, she would cover the little white house with a deer hide, and in the winter, she would put blankets over it. Sometimes she would leave a lighted lantern at the door.”  Chief Chittamo died in 1898 while camped on the Totogatic River.  A friend that was accompanying him at that time reports it was during the dead of the winter.  When they camped that night, the friend slept by Chittamo’s body to keep him warm.  When he woke up the next morning, he had discovered that Chittamo had passed away.  He took Chittamo’s body to the family.  Chittamo’s wife died of a stroke many years later.  She was picking blueberries when she died.  Untimely death was a reality in pioneer life when at the turn of the century, life expectancy averaged 47 years.  Emma Goodwin Smith wrote of the Wolfe Family heartbreak when their son, Roy, died of diphtheria at the age of 13-14: “They could not let him go, so Uncle Jim and she laid him to rest in their backyard under the big pines.  I’m sure the remains were later moved to a cemetery.” stated Emma.  Emma’s accounts are replete with many stories of the Wolfe’s, their neighbors, and of her own family, the Goodwin’s.”  The cemetery and town hall at Chittamo were once part of a thriving community, were restored through the Indianhead Community Action Agency and the town’s people.  Mrs. Patricia Stoddard was head of arrangement committee.  Scheduled speakers were Mr. Charles Stoddard, Judge Ward Winton, and Mrs. Zoe Richey.  Chittamo was named for Chippewa Indian Chief Ojidamo, meaning Red Squirrel.  The story of this Indian Chief’s death was that he died with a friend in 1898 on the Totogatic River.  It was in the cold of the winter he died during the early evening.  At one time Chittamo had a school, church, general store, and a post office, (which was known as the bug house).  At that time, Minong was the major trading center.  While Indians had long been camping at Chittamo, its first settler’s didn’t come until the 1880’s.  They were the Goodwin family and the Wolfe family.  Other parts of the area were inhabited by logging.

For more information go to http://home.comcast.net/~prncplx/wolf-springs.htm

Wolf Springs is about one hundred years old. The first white settler that found Wolf Springs was James H. Wolfe who came in 1887. James H. Wolfe was married to Sarah Sophia Moore Wolfe. James died in the early 1920’s. He killed about 65-70 deer in a season and sold them to make money for his family.  He had a barn and it had a trout hatchery near it. He raised the trout and then let them go in the spring. The Wolfe homestead was located five miles southwest of the Blackburn Store and northwest of Chittamo. Wolf Springs had a lot of wildlife such as  deer, bear, birds, turtles, and muskrats. There were saw mills by the river, so when someone floated logs down, they could cut them into lumber. They used the lumber for dams, buildings, and stables.

For more information go to http://home.comcast.net/~prncplx/wolf-springs.htm

Early History of Minong and its Name

Minong came about around 1880.  The name is Minong in Ojibwa; people think it means a lot of things like timber wolf and pleasant valley because they have very similar names.  The name is actually pronounced Mi-nong.

The Ojibwa originally came to Minong to hunt, trap, pick berries, and find wild rice along the river, but actually settled outside of Minong.   In 1880, Mr. Robert B. McLean was exploring the area and decided to tell his good friend Josiah Bond to come down and look at it.  It took Josiah three trips to find a place he would settle.

Logging is a big part of the history of Minong, which started around 1854.  Minong was located in the center of a large white pine forest, which were very valuable.  The land with the white pines sold for $1.25 an acre.  Under the Homestead Act, men were hired to stay on land until the timber was cut. The logs were sent down the local rivers to the saw mill.  The area was perfect because of the many rivers that surrounded it.  Then roads were built due to the logging.

Logging families lived off the land and farmed for produce, eggs, milk, and cream.  Then these items were taken to Chicago on foot or by horseback, which took too long so the produce would often spoil.   Eventually, they used the railroad to prevent the produce from spoiling.  They also tried to farm potatoes, but people in Superior were farming faster than people in Minong.

Later, they started adding on buildings and other businesses.  There was a post office, school, trading post, churches and many others.  Today, there are still many businesses that were here a long time ago.

We found this information for this exhibit from

Forest Point is a resort in Gordon, WI on Lower Eau Claire Lake with rental cabins and a golf course.  David and Andrea Babcock own it, but it used to be owned by Walter Fowler.

Walter bought the land thinking of mining copper.  He didn’t have any luck so he decided to farm it.  The Chippewa helped him build his farm and cabin in 1902.  Later, Walter’s son Harold and his wife Laura took over the farm.

Harold and Laura added rental cottages, a small grocery business, and a restaurant.  They named it Crystal Beach Resort in 1922.  In 1929, the name changed to Forest Point.

David and Andrea bought Forest Point in 1976.  Harold and his wife moved to a house on Lower Eau Claire Lake. Andrea Babcock originally purchased the land because it was one of her favorite childhood memories.  Her father had worked for the Fowlers back in the 1920’s mowing lawns. He also helped them put the original sand greens on the golf course in 1929. It wasn’t until the 1990’s when the Babcock’s changed the sand greens to grass greens.

There have been many expansions and improvements since David and Andrea bought it.  To help with business, they rebuilt many cabins and bought more land and beach front cabins from neighbors.  They joined the Eau Claire Lakes Business Association and advertised that the lakes were “Walleye Lakes.” However, after a few years the walleye were gone.  Now they advertise that the lakes are clean, good for bass fishing, and have sandy beaches.

The Gordon copper mines were started in the year 1890, and ended in 1913.  There were copper mining operations at the Weyerhaeuser and Mudge Mines. One of the larger copper developments was the Weyerhaeuser Mine, which was a series of shafts and small dumps in Gordon.

In the mine the F shaft descended three hundred feet and had four levels.  The Native copper is found as small wires and masses in veins and amygdales in basaltic lava flows.  The deposit was discovered in the late 1890’s.  The mine work continued at the Weyerhaeuser Mine in 1906-1914 with shafts, trenching and drilling.  Even so, no more than a few thousand pounds of ore were extracted.

The mines were located at the SE corner of Gordon, WI.  In 1767 the copper was discovered by prospectors who were looking for other minerals.  There was not much copper where they were, but what was found was almost pure copper.  There were ancient Indian cultures that started the mines.  The clanks of tools hitting rock could be heard from miles away.  Early in the 18th century the miners started using dynamite to blast through rock to hit copper deposits.

The native copper was the primary ore mineral, being found as wires and masses reportedly weighing up to seven pounds.  Minerals found in the mine and on the mine dumps include copper, silver, malachite, azurite, calcite, quarts, and chlorite. 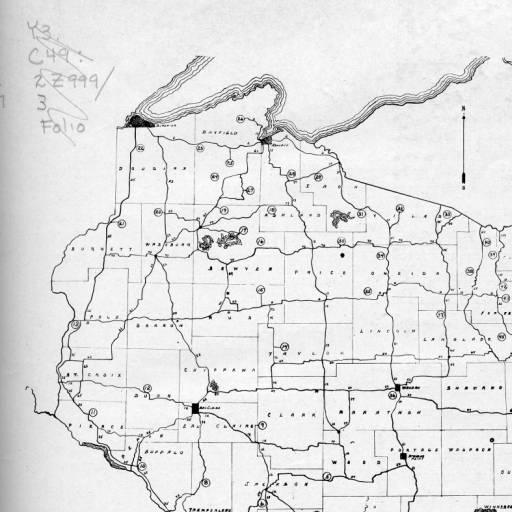